On Wednesday, San Francisco opened its first “vehicle triage center,” a long-term parking lot geared for people living out of cars and recreational vehicles, which City Hall hopes will offer solutions for homeless residents who rely on vehicles as shelter but have trouble securing legal parking. END_OF_DOCUMENT_TOKEN_TO_BE_REPLACED

Safe parking site up for approval

Neighbors, Planning Commission to weigh in on facility for homeless living in vehicles

The San Francisco Planning Commission on Thursday will weigh a proposal to temporarily use a parking lot near the Balboa Park Bart Station as an overnight rest stop for RV and car dwellers, complete with services.

Pending the commission’s approval, the city planning code would be amended to allow long-term parking and overnight camping in vehicles, as well as the addition of restrooms and showering facilities at a current parking lot near the Balboa Park Bart Station that is slated slated for the construction of 100 percent affordable housing next year. END_OF_DOCUMENT_TOKEN_TO_BE_REPLACED 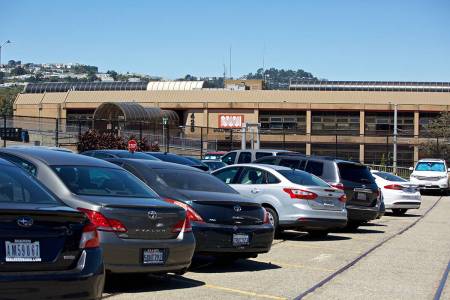 A parking lot near the Balboa Park station has been identified as a possible safe parking location for people living in RVs. (Kevin N. Hume/S.F. Examiner)

It’s been a long road, but homeless RV and car dwellers may finally be able to park and rest.

City officials have proposed a Balboa Park site for the first “triage center” site for people living in their vehicles. The site at 500 Geneva Ave. at Balboa Upper Yards, announced Supervisors Ahsha Safai and Vallie Brown Monday, would provide a safe place to park and social services.

“We’ve seen a rise in homeless people living in their cars in our neighborhood,” Safai told the San Francisco Examiner Monday. “This is an honest conversation, nothing’s been decided yet.”

A community meeting is planned at Balboa High School from 11 a.m. to 1 p.m. to allow residents to weigh in on the plan this Saturday, July 20. Should the community be on board, Safai said he expects the pilot to begin in November, pending new legislation to lock-in the site.

The Balboa Upper Yard property will one day host 138 units of affordable housing, with the triage center providing a temporary use for the site in the meantime. END_OF_DOCUMENT_TOKEN_TO_BE_REPLACED

Work has finished at the Balboa Park BART Station on the renovated east-side entrance, used by many in Sunnyside, in order to increase safety, passenger convenience and accessibility. Come to the ribbon-cutting ceremony on Friday Nov 30, 11 AM.

On Friday April 20th and Saturday April 21st, view the developers’ plans for the Balboa Reservoir, including open space and community amenities. Give your feedback and talk with the design team. Ask questions, talk with neighbors, have refreshments.

END_OF_DOCUMENT_TOKEN_TO_BE_REPLACED

Bart is planning improvements to the Balboa Park Bart Station. They want to know what improvements are a priority to you. Take the brief survey here.

Learn more about the plans here.