Read the latest news about the Detroit Steps Project at DetroitSteps.org

The Detroit Steps Project (DSP) was launched at the SNA Quarterly Meeting on November 3, 2018, with a presentation by Sunnyside resident Pam Parker-Souza. There had been a long-standing idea among neighbors and the Sunnyside Neighborhood Association that the neglected public right-of-way had excellent potential for improvement and could become a local treasure. With renewed interest among SNA members, the idea took hold.

The Detroit Steps are a two-block public stairway in Sunnyside, comprising 186 steps that run from Detroit and Hearst to Detroit and Joost, bisected by Monterey Boulevard.

The DSP is a multi-year and multi-phase endeavor and a community-led beautification project. Project members meet regularly to review progress and plan for improvements. The goal of the DSP Steering Committee is to lead this effort while engaging with the community. Rosaura Valle, Project Lead:

“It is our hope that together we will make the Detroit Steps an appealing and inspirational place for commuters, walkers, and residents. Please do not hesitate to give us your feedback, participate and volunteer with us.”

The Story of the Detroit Steps Project

Both sections of the Steps—the Lower Steps from Hearst to Monterey, and the Upper Steps from Monterey to Joost—have been unattractive for many years, blighted by overgrowth and neglect, and prone to illegal dumping and loitering. There are significant safety hazards all along the Steps for pedestrians, especially children and seniors, and they are dangerous after dark for lack of appropriate lighting.

Beginning in 2019, DSP volunteers began their work by focusing on lighting, and improving the steps with landscaping, with a long-term view toward decorating them with artwork. Outreach to the families living adjacent to the Steps brought forth many interested residents willing to participate in the process of beautification, cleanup, and fund-raising. A community has grown up around the aims of the Project—a true local groundswell of support. See photos from the Kick-Off Event here.

Through District 7 Participatory Budgeting in 2019, they secured $25,000 in funding, awarded in June. The money was earmarked by the City to improve and beautify the steps. Unfortunately, lighting was not included in the winning proposal, due to prohibitive cost. Read more here.

In September 2019, a site visit with assigned Dept of Public Works Project Manager Jonathan Goldberg was the opportunity for the Project’s sponsors to demonstrate the need for repairing structural problems with the Steps and surrounding retaining walls, pavements, and handrails. The issue of regular pruning of trees adjacent to the Steps was also addressed. DSP volunteers are in regular contact with the Dept Public Works to coordinate improvement.

The DSP steering committee decided to allocate the participatory Budget funding to the replacement of the present unsightly chain link fence at the top of the Lower Steps at Monterey Blvd. Additionally, the installation of a water meter was made possible through an additional $20,000, thanks to a DPW-SFPUC partnership.

The DSP selected a new fence style through a community input process; the choice was steel with an attractive decorative design featuring forerunner rails and ball finials on the posts. In addition to polling members at the SNA Quarterly Meeting of February 4, 2020, they also printed and distributed door hangers along the Steps asking for feedback on the choice of color. The winning color was bronze, similar to the fence installed at the Sunnyside Conservatory during its renovation several years back. (Installation pending.)

The DSP has been active in community-building since the first kick-off event. Activities include regular organized clean-ups. In November 2019, a novel fundraiser event was invented—the Rise-and-Run Step-a-thon—destined to become an annual tradition in the neighborhood. Read more here.

In addition to regular updates presented at SNA Quarterly Meetings and periodic posts on the SNA website, the DSP has been featured in the local media, such as the Glen Park News and Hoodline.

Transformation of the Steps

Clearing the overgrowth surrounding both the Upper and Lower Steps has meant several community clean-up days in 2019. In the first ground-breaking event, D7 Supervisor Norman Yee and more than 35 residents joined together with other community members to plant one of the slopes of the Lower Steps. Read more here.

The Upper Steps have been a particularly striking site of change. Energetic volunteers also tackled decades of weed growth and ivy in the Upper Steps in June 2019, thanks to the participation of the Green and Clean Team (GCT) of the DPW Street Parks Program. In November, The GCT participated to another major clean-up event, including the removal of a battered wooden fence which was located midway in the Upper Steps on public property, and used to conceal illegal dumping.

Removing the overgrowth and the fence revealed up a small patch of ground that opened up new possibilities in the area. Partnering with local City College Dept of Horticulture, we offered the Upper Steps public site as a live experiential class to the Landscape Design students led by instructor Thomas Wang. Students visited the site in October, and then provided final drawings of their landscape vision for the site in December. Read more here.

The DSP Steering Committee provided feedback to the students as real-world customers, and then selected the three best drawings, which were voted upon by the Committee and the SNA community. See photos and drawings here.

During winter 2019-2020, some experimental seed scattering and planting has been carried out by DSP volunteer Joy Durighello, official Street Parks Steward of the Upper Steps section, and a fan of California native plants. Joy has been walking the Steps regularly over two decades, and has brought energy and knowledge to her stewardship of this neglected stairway. Now the plants are blossoming and thriving. 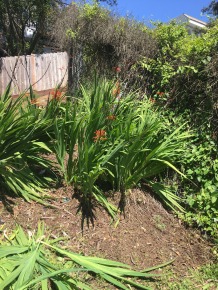 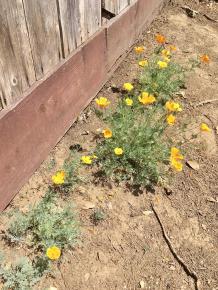 In Spring 2020, signage was added at several locations on the Steps, to raise awareness of the Project. Read more here. 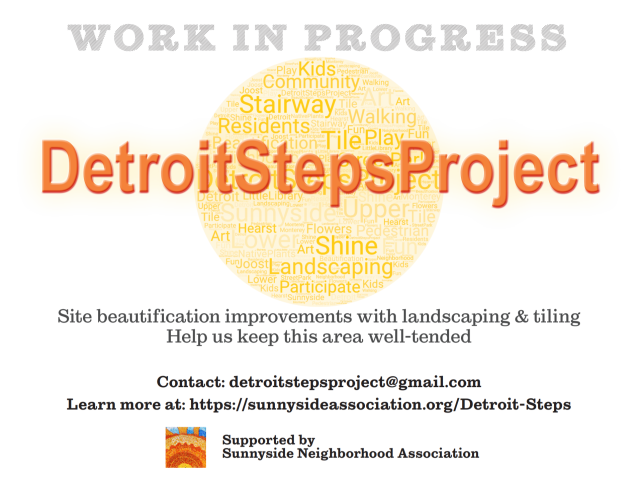 Other aims of the Project for 2020 are: creating an archway for the new fence to bring awareness and visibility to the site; drafting a plan for the Upper Steps terracing (evaluation, budget, design); drafting a plan for lighting both the Upper and Lower Steps to improve visibility and pedestrian safety (evaluation, budget, design); and requesting funding through a Community Challenge Grant application (Fall 2020).